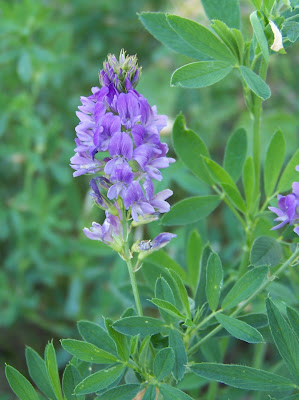 Growing, Cultivation, and Harvest
It is not picky as to soil, but it does prefer full sun and regular watering. The aerial (above ground) parts of the plant are used in herbal medicine. I grew up growing alfalfa for our ranch in South Dakota. I spent my summers stacking grass hay and alfalfa hay. My Grandmother made herbal infusions and kept a small plot of alfalfa in her garden for organic purposes. Alfalfa is an excellent plant to grow in your garden!

Easily grown and propagated, alfalfa adapts well to nearly any garden, tolerating a wide range of growing conditions. It makes a good drought-resistant plant too, as it doesn’t like wet feet. In fact, too much moisture can lead to mold growth.

When growing alfalfa, choose an area with plenty of full sun. Also look for a well-draining area with a soil pH level between 6.8 and 7.5. Prior to planting, you should clean the area, work the soil, and remove any debris. Pure alfalfa seed can be purchased from most feed supply stores.

Those living in cooler climates can plant alfalfa in spring while milder regions should opt for fall planting. Since alfalfa roots quickly, it doesn’t require deep planting—only about a half inch deep. Merely sprinkle the seeds evenly onto the soil and cover lightly with dirt. Use about ¼ pound of seeds per 25 square feet and space rows about 18-24 inches. You should begin to see sprouts within seven to 10 days. Once seedlings have reached about six to 12 inches, thin them as needed to avoid overcrowding issues. Unless growing alfalfa as hay for livestock, allow it to grow until crops are ready to be planted or its purple blooms appear, at which time you can simply mow it down and till it into the soil or leave it. The alfalfa shoots will breakdown. This ‘green manure‘ will then fertilize the soil as well as stimulate microbial activity, thus aerating it too.

If planting alfalfa for livestock, it will need to be harvested and cured prior to flowering (known as early-bloom stage). It becomes more difficult for these animals to digest once the plant matures. Harvesting in this early-bloom stage also ensures the most optimal nutrient percentages, which is often found in the plant’s leaves. Do not cut alfalfa if rain is imminent, as this can damage the crop. Rainy weather can lead to issues with mold. Quality alfalfa hay should possess good green color and leafiness as well as a pleasant aroma and thin, pliable stems. Once harvested, the ground will need to be turned before next season’s planting takes place.

Alfalfa has few pest problems; however, the alfalfa weevil can cause serious damage. In addition, the stem nematode can infest and weaken stem buds.

Alfalfa leaf contains a broad spectrum of nutrients, including considerable quantities of protein, trace mineral and vitamins, dietary fiber and chlorophyll, which serves as an antioxidant in the bloodstream. The deep root system absorbs minerals from the soil resulting in a plant rich in vitamins and minerals and a great source of fiber and protein. Alfalfa leaf is rich in protein and vitamins A, D, E, and K. Alfalfa extract is a good source of chlorophyll and carotene. It is important to insist on certified organic alfalfa, since the plant concentrates cadmium, copper, lead, nickel, and zinc when it is grown in contaminated soils.

How to Take
Getting alfalfa into one's diet is not at all complicated. It can be taken in many different forms. A popular way to get this herb into the system would be to drink brewed tea daily. For added benefits and a better taste, a helpful suggestion would be to brew alfalfa tea with another flavored tea, as while the health benefits of this herb are extremely apparent, the taste can be slightly bland. This herb can also be taken in capsule form, in much the same way a person might consume their daily multi vitamin. This is a great way of gaining all the health benefits every day. Dried Alfalfa is as good, if not better, than fresh Alfalfa so capsules are a great way to take it. Alfalfa can also be mixed in with different foods. Salads, soups, casseroles, or whatever one's heart desires can be made healthier without hardly any change in taste. The alfalfa herb is very mild in flavor so can be used in many different ways.

Alfalfa can be taken in capsules, teas or eaten as fresh raw sprouts that have been rinsed thoroughly to remove mold. Alfalfa tea is mild and good tasting, and blends well with many other tonic herbs like nettle, mints, and citrus.

Health Benefits
Minerals
Not only does the alfalfa plant contain a full spectrum of important vitamins, but it is also loaded with extremely important minerals such as biotin, calcium, folic acid, iron, magnesium, potassium, and many others. As if there needed to be another reason as to why it's so great, the alfalfa plant is also super high in protein, especially when dried. The alfalfa plant has an unusual, extensive root system that can reach as far as 60 feet into the soil. This is what allows the plant to absorb more vitamins and minerals than the average plant, further giving credentials to its Arabic title as, "The king of all foods."

Diuretic
The alfalfa plant, along with many other ancient herbs, has a list of health benefits that are nearly endless. It has been found that regularly ingesting alfalfa can aid in flushing the bowels of built up toxins. In addition, the alfalfa herb has been used widely for diuretic purposes. This is especially common among people who had been experiencing things like heavy water retention or urinary tract infections. Using a natural herb as a laxative or diuretic is much more beneficial than using an over the counter remedy, because there aren't any added chemicals or compounds that could further irritate the situation.

Additional benefits
The alfalfa plant has beneficial healing properties against bad breath, sore or achy joints, imbalanced skin conditions, and it even increases immune system functionality. When consumed regularly, it acts as an alternative to over the counter pain medicines for headaches or migraines because of its high calcium and magnesium levels. As anyone can see, consuming alfalfa herb on a routine basis has an abundance of positive health results.

A source of commercial chlorophyll and carotene, both with valid health claims. Contains the anti-oxidant tricin.

Alfalfa is associated with earthly providence because its roots penetrate so deep into the dirt. Adding fresh alfalfa sprouts to a meal is thought to ground etheric energies and increase the physical sustenance of foods.  It’s also associated with psychic awareness and to attract animal spirits.
Keep in the home to protect from poverty and hunger. It is best placed in the cupboard or pantry.
Also used for success in money matters.  Used for money drawing.  A traditional “luck” herb. Not powerful enough to be used alone, this herb “plays well” with other herbs such as Basil, Patchouli and Goldenseal helping to reinforce other luck and money herbs while adding a bit of protective insurance.

Burn Alfalfa and scatter the ashes around the property for this is used in spiritual abundance work.
Harvest a small quantity at the full moon. Dry and burn in the fire pit. Place ashes in a spiritual amulet.  Weave together alfalfa strands to make an amulet to protect against poverty.  Add alfalfa to your magical cooking to ward off disease, bring money into the home and when general grounding is desired.

In hoodoo, Alfalfa is used for money matters of all kinds, from gambling, to business success, to obtaining a bank loan. It is also used to prevent poverty. Place a pinch in your gris gris  bag or mojo hand for money luck.

Grow a pot of Alfalfa on your windowsill.  If you’re nervous about a meeting, drink a tea beforehand by placing two heaping teaspoonfuls to a pint of hot water.  Steep 10 minutes and strain.  Drinking this tea at other times will help you release your fears.

To bring about Good Fortune in all sorts of Money Matters, both through Business Success and through Good Luck in Gambling. It is particularly said to keep away poverty and prevent financial troubles. Some folks tell us that that they like to sprinkle ALFALFA under the carpets in their place of business to attract and hold Steady Paying Customers or Gain the Boss’s Favor. Others say they carry a pinch of ALFALFA LEAVES in a green flannel bag or in their pocket when they go to place a bet because they believe that it will Bring in the Winnings.

Contraindications
Alfalfa Side Effects: If you have lupus or are in remission, you shouldn't consume alfalfa seeds. Use alfalfa only during its prebloom stages of growth. Alfalfa seeds should never be eaten unless sprouted because they contain high levels of the toxic amino acid canavanine.
Persons with autoimmune disease or hormonal cancer should avoid alfalfa. Pregnant women and persons with gout should also avoid alfalfa. Consult your healthcare provider before using alfalfa leaf if you are currently taking any form of medication or dealing with an autoimmune disease.
Warfarin (Coumadin) interacts with ALFALFA
Alfalfa contains large amounts of vitamin K. Vitamin K is used by the body to help blood clot. Warfarin (Coumadin) is used to slow blood clotting. By helping the blood clot, alfalfa might decrease the effectiveness of warfarin (Coumadin). Be sure to have your blood checked regularly. The dose of your warfarin (Coumadin) might need to be changed.
Some birth control pills contain estrogen. Alfalfa might have some of the same effects as estrogen. But alfalfa isn't as strong as the estrogen in birth control pills. Taking alfalfa along with birth control pills might decrease the effectiveness of birth control pills. If you take birth control pills along with alfalfa, use an additional form of birth control such as a condom.


For relief of rheumatoid arthritis some people take 9 to 18 alfalfa tablets daily.

Learn More?
If you are as addicted to herbs and plants as I am, maybe you'd like to learn more. Join us for the Sacred Herbal Certification Course where you will learn step by easy step how to craft professional products at home. (You know there's more.)
My Grandmother taught me how to know a plant's medicinal properties in moments. This course teaches you this skill! You will be creating your own apothecary from Day 1. It is so much easier than you think!
Come join us!