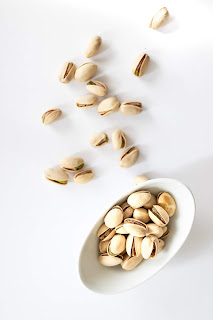 Pistachios had been linked in previous studies to lowering bad cholesterol, and a new study reported by Science Daily says they also increase antioxidant levels in the bloodstream. Antioxidants are molecules that prevent oxidation damage to other molecules.

Oxidation damage may be a source of serious illness and disease. Low levels of antioxidants in the blood may cause what is called "oxidative stress." Oxidative stress can lead to the dying off of good cells needed to function. It is still unclear in science whether antioxidant levels are associated with degenerative diseases. Penny Kris-Etherton, a Penn State professor of nutrition and head of the new pistachio study, doesn't believe science yet understands antioxidants. "The antioxidant story is very disappointing to the scientific community," said Kris-Etherton in the Science Daily pistachio report.

In this new study, researchers gave 2 groups with the same base diet, differing amounts of pistachios. One group received 1.5 ounces of pistachios daily while the other received 3 ounces each day. Both groups had increased lutein, beta carotene, and Vitamin E with all participants decreasing their bad cholesterol levels after the study.

Another heart healthy benefit to these smiling nuts, as they are commonly referred to as, is the presence of the amino acid, arginine. Arginine benefits people who suffer from angina and those who have undergone serious trauma. Arginine is an important factor in cell division, removing ammonia from the body, releasing hormones, and helping maintain a healthy immune system.

A one ounce serving of pistachios has 160 calories. Pistachios have proven to be an excellent source of vitamin B6, fiber, thiamin, and phosphorus. Eating nuts in general is associated with a lower body mass index, and no weight gain was measured by adding the daily intake of pistachios during the study.

Choosing pistachios wisely is the key to obtaining the maximum health benefits. Pistachios are often roasted and heavily salted, making those varieties a danger for those watching sodium levels. Finding a source of unsalted, raw pistachios, could be a great long term asset to one's health plan.

Adding healthy pistachios to your diet is easy. They are a tasty snack by themselves or you can add them to salads, smoothies, or desserts. Organic pistachio nut butter offers the ease of being creative while adding antioxidants to your diet.

This post is sponsored by Bistro MD: Diabetic Meals Delivered to You!