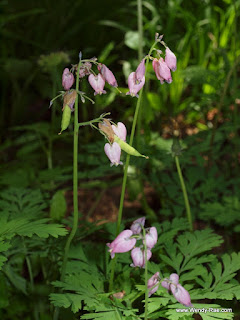 Make bleeding heart plant remedies and medicine for calming nerves and settling grief. Not to be mistaken by the popular bright pink ornamental sold in garden nurseries, wild grown bleeding hearts, as pictured above, are the medicinal variety this article is about.

Bleeding Hearts are native to the Pacific Northwest and love to pop up under big fir trees. Most people know the Bleeding Heart hybrid one can buy at the nursery, which is not the quite the same plant I’m speaking of. I’m writing about Dicentra formosa.

The roots are the most medicinal of the plant, but I tend to use a whole plant when I make medicine.

If you are going to harvest Bleeding Heart, please do so after they have seeded and just before the leaves turn brown in the fall.

Bleeding Heart roots can be dried, or used fresh in tincture.

Bleeding heart is considered to be a general tonic and good for calming nerves. I personally have found that it is great medicine to calm overwhelming grief and I’m betting that is where the name originates. One can use it as a pain remedy and I’ve read it is great for toothaches and mouth ulcers.

I tincture bleeding hearts and sometimes I’ll add it to an infused oil for a calming skin salve.

Next time you see a patch of Bleeding Hearts, take a moment to revel in the power of this simple plant.