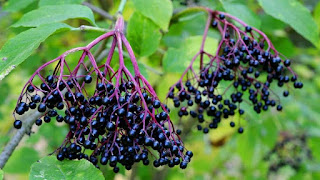 Folk medicines and herbal products have been used for millennia to combat a wide range of ailments, and in the process confounding modern scientists who have struggled to understand their medicinal benefits.

Now a new study from the University of Sydney has revealed exactly how one popular ancient remedy – elderberry fruit – attacks and thwarts the influenza virus. The virus, one of the leading causes of mortality worldwide, affects nearly 10 percent of the world population and contributes to one million deaths annually.

In their new paper, Australian scientists describe how elderberry compounds directly inhibit the flu virus’s entry and replication in human cells, while also strengthening the body’s immune response to influenza.

Otherwise known as Sambucus nigra, the elderberry is a small, antioxidant rich fruit common to Europe and North America that is still commonly consumed as a jam or wine. Although elderberry’s flu-fighting properties have long been observed, the group performed a comprehensive examination of the mechanism by which phytochemicals, compounds that positively effect health, from elderberries combat influenza infections.

“Our study has shown that the common elderberry has a potent direct antiviral effect against the flu virus. It inhibits the early stages of an infection by blocking key viral proteins responsible for both the viral attachment and entry into the host cells,” said Dr Golnoosh Torabian.

The researchers used commercially farmed elderberries which were turned into a juice serum and were applied to cells before, during and after they had been infected with the influenza virus. The phytochemicals from the elderberry juice were shown to be effective at stopping the virus infecting the cells.

To their surprise, the researchers also observed that the elderberry phytochemicals were even more effective at inhibiting viral propagation at later stages of the influenza cycle after the cells were already infected with the virus.

“This observation was quite surprising and rather significant because blocking the viral cycle at several stages has a higher chance of inhibiting the viral infection.”

The study also revealed that elderberry phytochemicals stimulated infected cells to release cytokines, a class of chemical messengers the immune system uses for communication between different cell types to aid in coordinating a more efficient response against the invading pathogen.

Learn More?
If you are as addicted to herbs and plants as I am, maybe you'd like to learn more. Join us for the Sacred Herbal Certification Course where you will learn step by easy step how to craft professional products at home. (You know there's more.)
My Grandmother taught me how to know a plant's medicinal properties in moments. This course teaches you this skill! You will be creating your own apothecary from Day 1. It is so much easier than you think!
Come join us!
Article Source: Golnoosh Torabian, Peter Valtchev, Qayyum Adil, Fariba Dehghani. Anti-influenza activity of elderberry (Sambucus nigra). Journal of Functional Foods, 2019; 54: 353 DOI: 10.1016/j.jff.2019.01.031